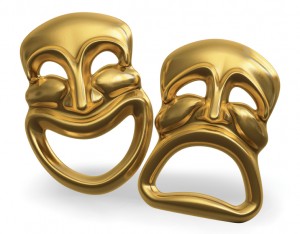 An important, and frequently mishandled point in theatrical collaboration agreements is the clause declaring when, precisely, “merger” of the collaborators' respective contributions to the play or musical occurs.

Not to be confused with the Integration clause found in many contracts, merger is the point (in time) at which the various creative elements are deemed to be merged or joined into a unified, single work.

Under U.S. Copyright law, a joint work exists from the moment of inception, if the collaborators have manifested their intent to create a work as a single, unified work.  But in the theatre, collaborators often prefer NOT to have their respective contributions (Book, Lyrics and Music) inextricably joined as one until some later point in time.  The merger clause allows the parties to work together on a sort-of trial basis, retaining ownership of their respective contributions until there's some indication that the show is “finished”.

Up until merger, any collaborator may withdraw or be removed, and frequently may  take his or her contribution out.  After merger occurs, the work is final, frozen, and may not be altered without the mutual consent of all collaborators.

Finally, The event of merger is also viewed by some as a protection for the Producer of a show, who can invest resources in the production, secure that once it is ‘merged', the show will not change further.

In all of these situations, it is extraordinarily important for  collaborators, rights holders,  and producers,  that the exact timing of merger be determined with great care.

Some typical events that trigger merger are:  The first press preview of the show; the final technical or dress rehearsal; the official opening performance  at a particular venue or level of production.    Each has its merits and its down-sides.  If the merger date is set too late, a disgruntled co-author could withdraw from the collaboration in anger, taking his part of the show with him.  If too early, a collaboration that doesn't really work well, could be “stuck” with an element (or collaborator)  that undermines the entire show.

The aid of an experienced and knowledgeable theatre lawyer can be invaluable in negotiating and drafting the collaboration agreement, and particularly, in evaluating when merger should be deemed to occur.  If you have questions about merger, or any other aspect of collaboration, please call us for a consultation.

One Response to The merging of Book, Lyrics and Music in theatrical collaborations: A complex and frequently mishandled issue.